Some days you only need to come away with one landscape image to justify an excursion.

On Saturday I set sail with Doglet and a friend and strolled through Black Spout Woods around Pitlochry, up to the viewpoint across the gorge where you can see the full height of the waterfall, and then round to the more accessible bit near the top of the falls, which still takes a fair amount of scrambling around on the river bank to get down to. 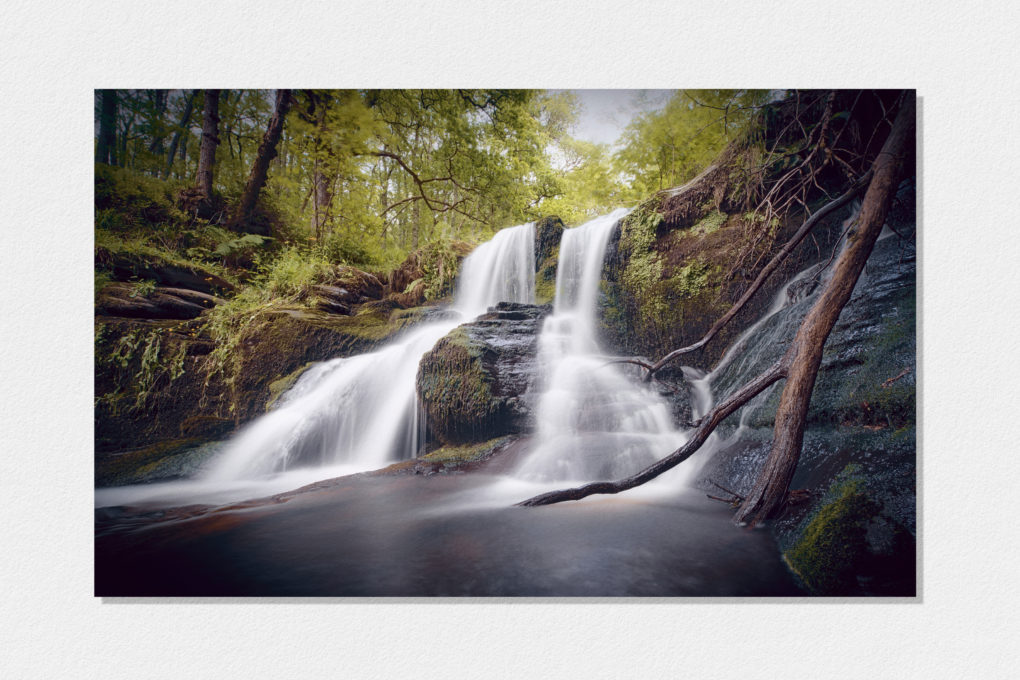 A nice stroll through the woods, a view across the gorge to the full height of the waterfall, some scrambling around on the banks to get down to this level (a small fraction of the total height down from the top) with friend and dog… A good way to spend an afternoon

There are three conscious aspects to this shot:

I wanted to make the most of the 15-30mm lens, so with a bit of wiggling around at the scene I found a spot right in front of the cascades that would showcase the 16mm ultra-wide field of view with a strong foreground. Nothing clipped; there’s negligible cropping except for lens-correction. There’s something in each pair of corners: the strong diagonal line of the dead tree-trunk in the foreground is echoed by the three distant trees in the far top-left; the negative space of the burnt-out sky has an echo in the expanse of run-off water in the bottom; treated as three stripes, there’s a balance between the height of the frame given to the run-off, to the bright white cascades, and to the woods+sky at the top.

I made 10 source images on the Pentax K-1, varying the exposure as follows:

This set of exposures spans a large contrast range from bright grey sky down to dark shadows in the rocks; it varies the shutter speed so at least a few will make the water look like brushed cotton; it varies the aperture partly to cater for the range of shutter speeds, and partly so as much of the shot as possible has a frame with maximum detail before diffraction. Enough data that enfuse could find a good midtone maximizing local entropy (detail) at every pixel.

Each of the above had pixel-shift enabled for greater resolution, totalling 40 frames of 36MPel resolution. The shutter was open for a combined total of 12s.

I used my open-source Pentax K-1 pixel-shift workflow on each of the 10 images above, and then reused it again to blend all 10 together into a combined HDR average. Opening this in darktable, I proceeded to correct lens-distortion, finalize the crop (16:10 aspect-ratio, one of my favourites for landscape), set detail modules (no need for noise-reduction! some balancing of detail, local detail, equalizer modules though) and exposure, toning (including tonemapping and low-pass filter) and colour (Velvia). There are not many localized modifications, but there are significant grad-ND filters both down through the trees and, opposing that diagonally, up from the bottom of the frame, along with two instances of the vignetting filter (one significant, one just clipping the corners); there is also extra local contrasted masked into an area around the dead tree trunk. Finally I opened the image in The Gimp and ran the G’Mic filter suite including colour-grading twice (once conventionally, once with extra highlight/shadow duotone effects, blended together – this has the side-effect of changing the tonality in the green leaves to make it look brighter/sunnier than it actually was). A tweak to the curves to lift the overall gamma and then I overlaid my favourite texture image, a photo of a sheet of Hahnemuehle Photo-Rag paper, in soft-light mode to soften the contrast and add a small amount of texture into otherwise barren areas.

Working this way hits a sweet-spot in terms of convenience and image-quality.

I did not fall in the river. That’s a good start.

With such a wide field of view, every centimeter counts when choosing the location. With the 15-30mm lens I was able to experiment, iteratively varying location and focal length, until an optimum position was found, all the while seeing exactly what the final composition would be in live-view.

Pixel-shift – moving the sensor around in a 1px square pattern – works as a great way to increase the resolution.
The alternative would be to shoot a panorama, but that would still require HDR blending of frames as well as risking motion-artifacts in the trees; with just HDR on its own, the ghosting of the leaves from averaging multiple frames is a more pleasant indication of movement rather than errors in stitching. Additionally, shooting a panorama would require just as much care over camera position but would not allow a preview of the composition.
As a hybrid option, with cameras that lack pixel-shift or equivalent technology, one could compose approximately and then vary the tripod position subtly to emulate hand-held camera-shake; this is almost identical to pixel-shift in terms of super-resolution, but varying the camera position risks introducing artifacts from lens-distortion and parallax between foreground and distant parts of the scene, that pixel-shift avoids.

Additionally, shooting every frame 4x over, automatically, increases the overall exposure time into multiple seconds, even in daylight, which avoids the need for Big Stopper-type filters (especially handy on a lens that would require a special holder for such).