On the third day of my holiday last year, the weather took a turn for the worse and my chosen route for the day was closed until Spring, so I went for a walk around the Reelig Glen just outside Inverness.

To be more accurate, the first walk around the glen was favourably interrupted by a very friendly wee collie dog, so I did the whole route a second time with the camera…

It was beautifully relaxing, good for the soul. A place of shapes and light and more shapes and green and autumnal orange colour.

About half-way around the route, just round from crossing the bridge, is Dughall Mor – a Douglas Fir tree that at one time was the tallest in Britain. They do not put any signage by it, except for a very tiny mark on the bark, but I know which it is. 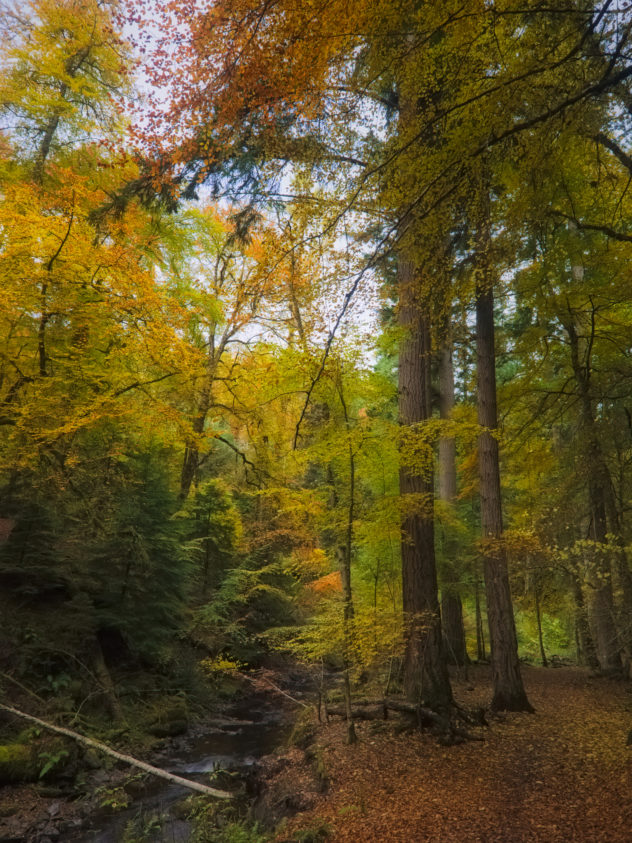 One of these trees used to be the tallest in Britain.
(I know which – they don’t advertise it for safety reasons, save for a very small mark.)

About six years ago, on my first visit to the glen, I also met a small dog and attendant human; the conversation has stuck in my mind, partly for the subject-matter but mostly because of its gentle and slightly surreal nature. A person who knows there’s nothing better to do than to sit on a bench watching the old dog play in the burn. At the time, I wrote about the encounter thus:

The Shadows of Importance

As I came nearer, crossed over a small bridge over a burn, I saw an elderly Westie playing, slowly investigating all around… with his also-eldery designated human sitting on this bench.
And we conversed.
About the important things.
Dogs, trees, and somewhere waaayy down the line, people.
We walked through the woods and he showed me a tree that once was tallest in Britain.
The world of bright city lights was gone, a garish cheapness for and of strangers, long forgotten, as though it never was.
And there was complete serenity.
Some days I’d post an admiration of the forest. Today you get the waypoint where Hamish played and Geoff sat.
Or maybe it’s still an admiration of the forest anyway… 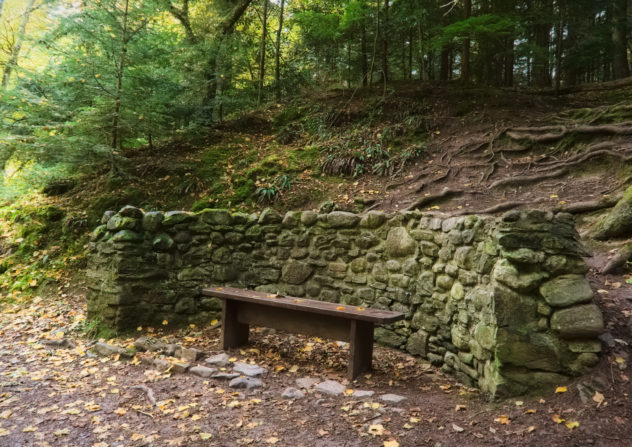 Scene of an encounter

This time of making the circuit around the Reelig Glen, there was no sign of Geoff or Hamish – but I remembered them, and was grateful for all the dogs who love me.

The light, when the clouds permitted, was glorious – illuminating the foliage beautifully.