Many moons ago… the parents and I were on holiday around Caithness and having trouble finding the way to Whaligoe Steps. As his tractor turned by the end of the field, we stopped a farmer to ask directions. To southern ears, the instructions sounded memorably like “turn right at the fussky-osk”. With a little thought we established the meaning… and twenty-two years later I still remember the turn of phrase and was pleased to identify the first phone-box in this Spring’s return visit.

Whaligoe Steps themselves are 365 steps down the side of a steep cliff to a former port for offloading herring boats; women would gut the fish and carry it up in barrels.

The place itself is quite an impressive geo with a fault nearby in the rock – strata lines pushed up by thrust – and pleasant views out to sea.

Further down the road are Camster Cairns – quite impressively large piles of rocks with interior chambers, perhaps the oldest buildings in Scotland at 5000yr old.

It had been another ludicrously hot day, with temperatures up over 25-28ºC, so we finished the day’s explorations on the north coast at the Slates of Fulligoe in East Mey, where the setting sun was partially obscured by a thick sea haar – very pleasantly cool. 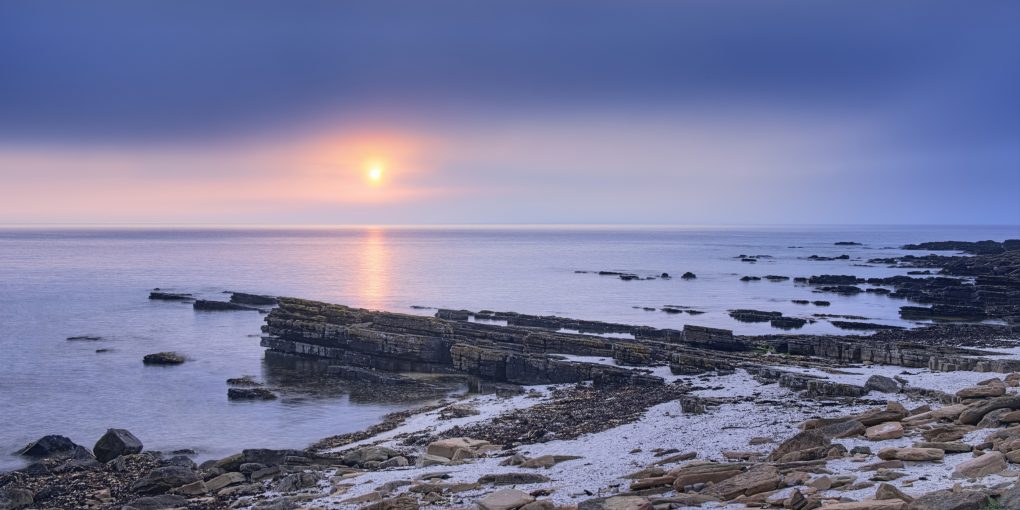 This was the second evening I’d set out to make a timelapse of the sunset into dusk. At least this time I was prepared for haar coming in off the sea (chose a safer less-cliff-top location near the path back, for starters). It did not disappoint: over the course of an hour the sun moved, the waves came and went, and a huge bank of fog moved in transforming the scene from brilliant sunset reflecting on the water, to complete white-out. All the possible moods of the landscape in barely an hour – quite awesome.
This photo is a temporal flattening of a timelapse sequence – using the intervalometer to shoot HDR brackets 3*±1EV at regular intervals which can be made either into a timelapse video or averaged-out into a still, like this. (The sun itself is blended from fewer images to avoid motion blur.)