In August I called in on an old friend in Inverary for a small guided tour around the local forests with camera in hand.

There was one particular photo I had in mind – ever since I first saw an old ruined barn with disused farm machinery, it was crying-out for the bokeh-panorama (aka Brenizer) technique – instead of one straight shot composed with the final focal-length in mind, one uses a longer lens (preferably a fast prime) and stitches the results into a panorama, to give an image with narrower DoF than was possible at the focal length in question.

Here’s the straight scene, taken on the Fuji X-H1 on the 16-50mm f/2.8 at 18mm – even wide open there’s no significant blurring in the background.

The second technique was keystone/perspective adjustment. On seeing a stone waterworks in the woods, my friend challenged me to get a view of it straight-on without using the drone. That’s simple enough – even though it’s several feet above head-height.

The third technique was simple long exposure: night had long fallen before I left the town but the clouds moving across Loch Fyne/Shira looked pleasantly ominous. Keeping base ISO, f/6.4 gave a 7s base exposure – with HDR 5*±2/3EV this became 7+18+30+27+10 = 92s combined total, retaining exposure from brightest point of clouds into shadowy areas in the mountainsides. (Contrast is not just a daytime problem!) 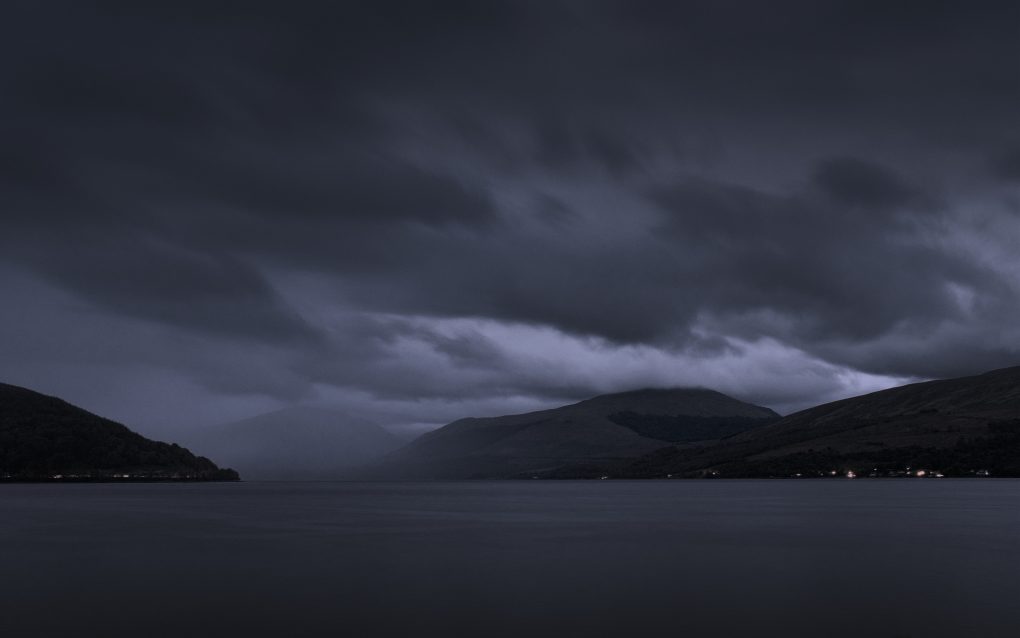 Several long exposures blended together into an HDR image of clouds and smooth water, Loch Shira from Inverary.