The first day of the holiday was spent in Glen Affric and working my way up to Rogart; on day 2, the weather looked best to the north-west so I drove over to my favourite Assynt for the day.

Even before I’d got in the car, I saw the first rainbow of many across the glen: 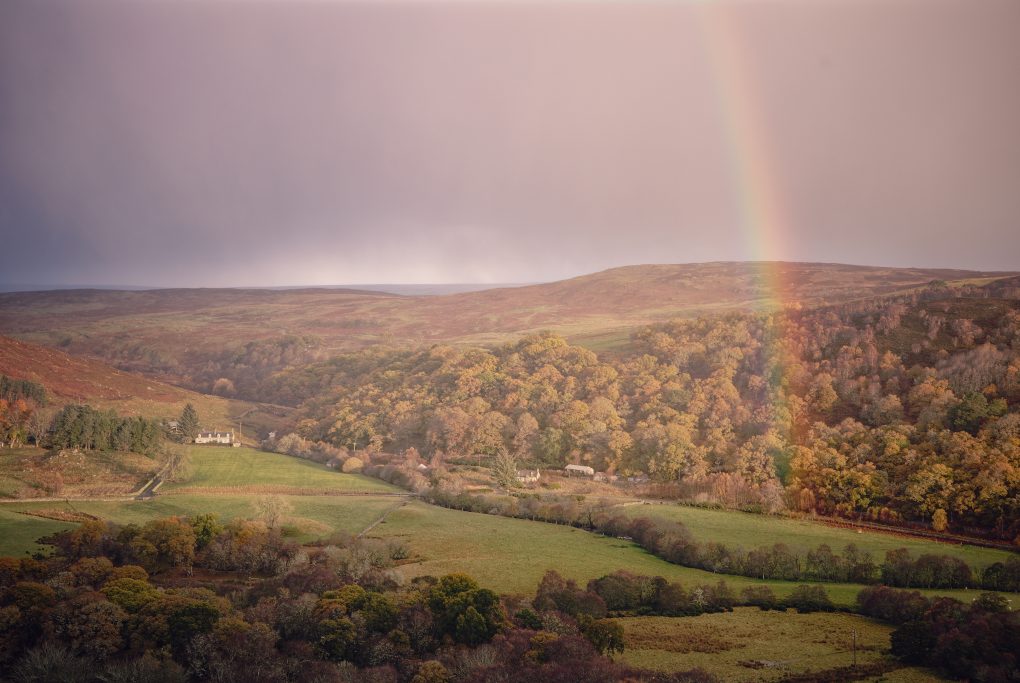 A sign of things to come: before leaving the lodge for the day, a nice rainbow appeared along the glen.

The road was every bit as narrow-veering-nonexistent as I remembered – always makes journeys feel that much longer than the mere count of miles covered – and increasingly the previous night’s snow-fall intruded onto the edges of the tarmac. Good challenging fun.

I only stopped once to make a photo of Ben More Assynt from across the landscape: 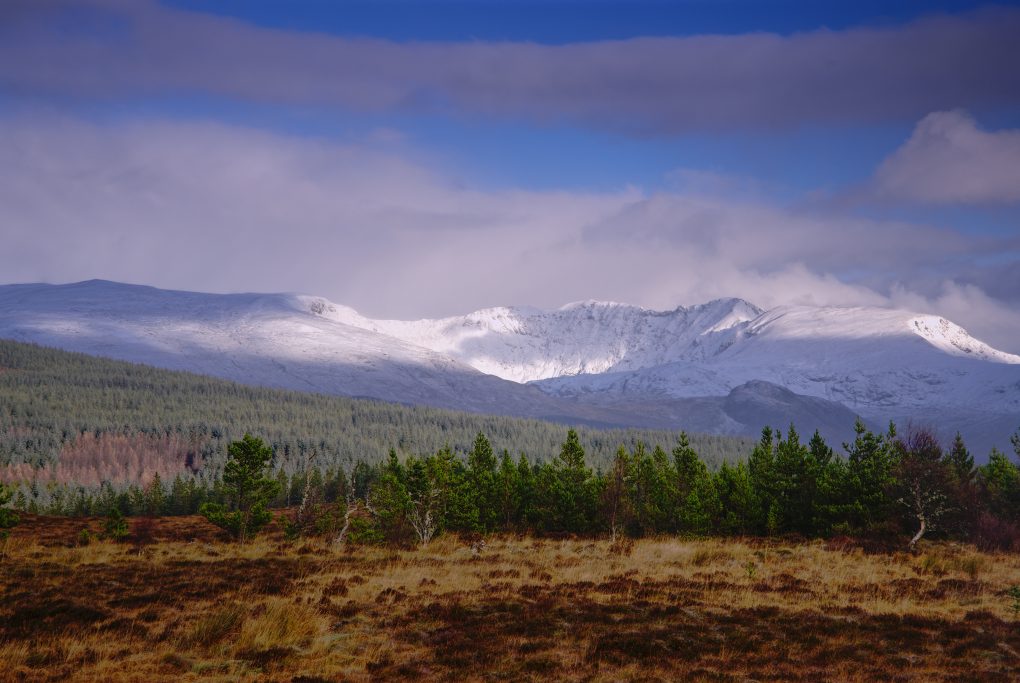 As I passed Inchnadamph heading toward Loch Assynt, the weather turned very mixed – phases of sunshine and hail alternating every couple of minutes – with some fantastic rainbows. It didn’t take long waiting in a layby before another one illuminated Ardvreck Castle – drive around the corner of the loch and walk down the castle and in next to no time, behold another rainbow. You certainly learn to read the signs pretty quickly – as soon as a bow appears, put your jacket hood up as the rain will be along shortly.

I also took a couple of photos of the Inchnadamph Caves, a distinctive rock formation on the Moine Thrust zone, in which bones of Eurasian lynx, Arctic fox, reindeer (dating back 47,000 years), polar bears (the only evidence of their presence in Scotland) and humans (back to 3000BCE) have been found:

Continuing north up the B894 a little way, even in dull cloudy light the surrounding mountains were beautiful, sprinkled with a heavy dusting of snow. I stopped at Loch na Gainmhich and explored around the frozen peat-bog by the roadside a bit: 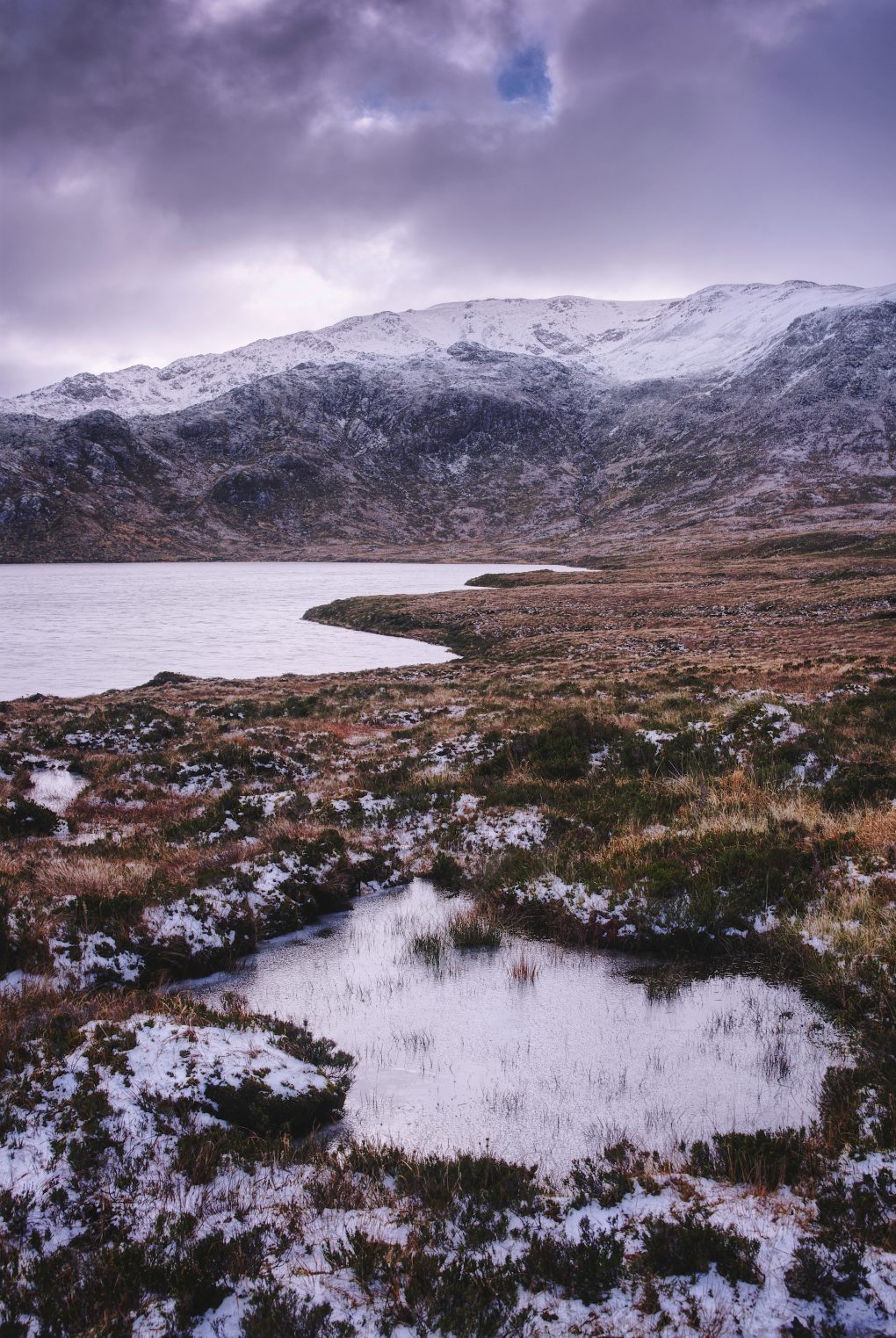 Sky above
The bulk of Glas Bheinn across
Loch na Gainmhich filling the corrie
Peat bog covered in heather
Frozen puddle
And it wasn’t even winter yet – just the first snows of the season giving a thick dusting coat over the mountains. With the sun hiding behind clouds, the light was a beautiful dull grey.

Turn around and what do you know, but there’s another vibrant double rainbow seemingly making its way over the landscape as well: 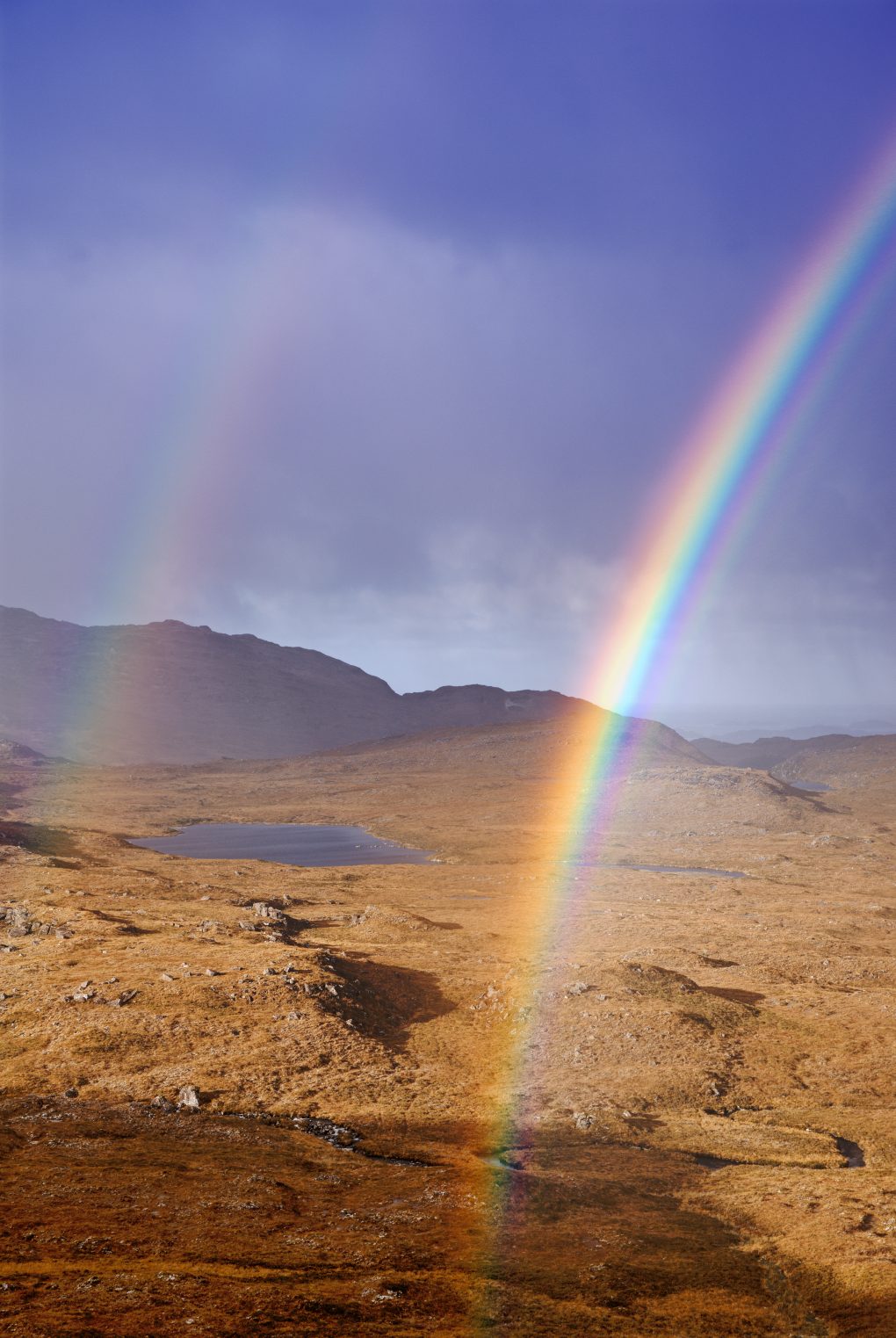 I stood beside at the top of the hill beside Loch Gainmhich looking over the undulating landscape to Loch nan Eun, watching the rainbow and its secondary bow evolve.

Having seen photos online of the Wailing Widow waterfall very near to the road, as the Allt Chranaidh leaves Loch na Gainmhich, I spent hiked over to the edge of the loch and, faced with a stiff wind and slippery frozen peat-bog underfoot, decided it wiser to approach the falls from the bottom of the 30m gorge instead. Not the easiest terrain either way – many large boulders, some slipped down from the sides of the gorge, requiring scrambling to cross with tripod and camera gear. From the little carpark barely off the road, there’s just a moderate river running away: 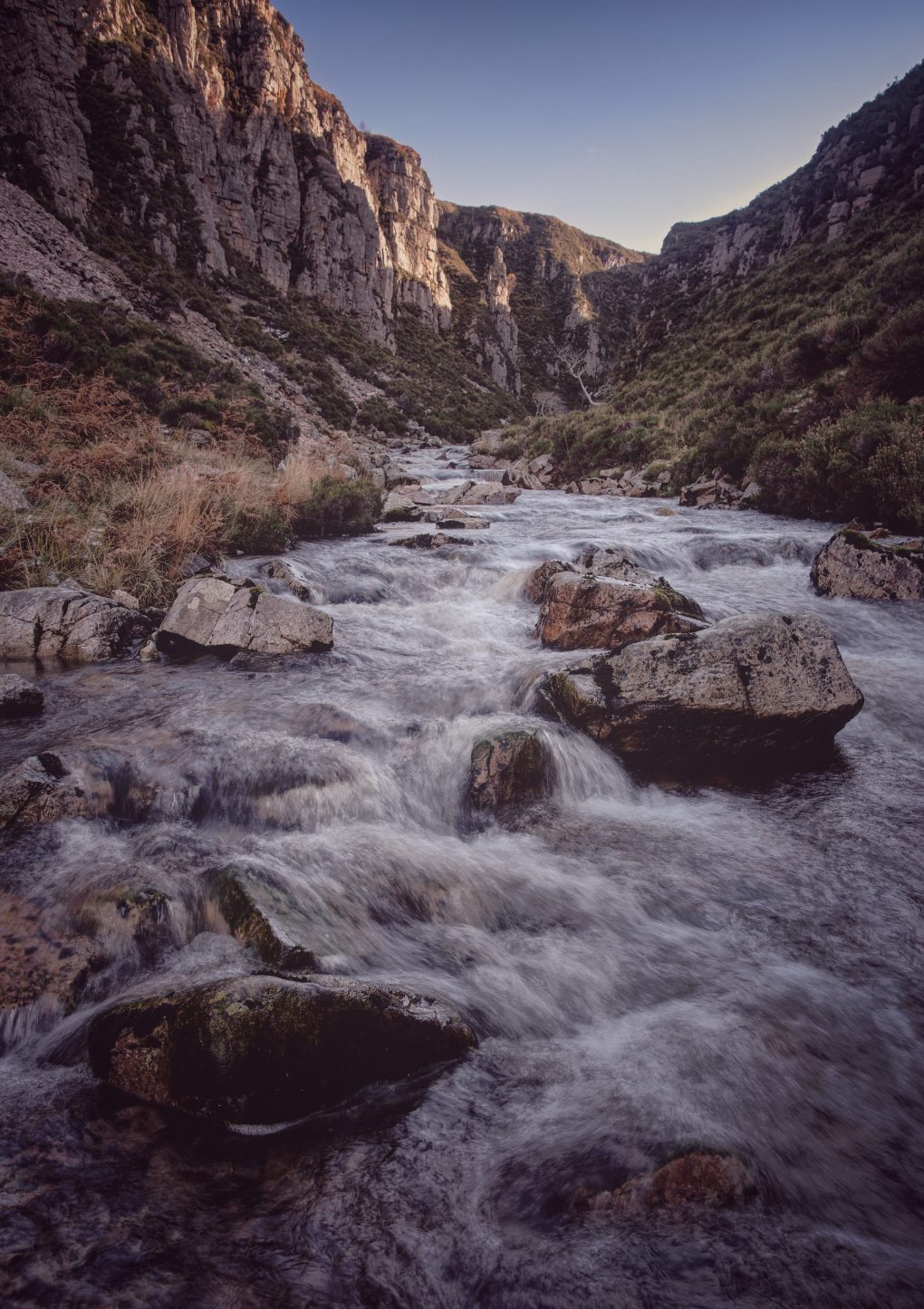 I’ve visited Assynt several times over the years but was quite surprised to discover a “new” waterfall via various online contacts, and one right by the roadside at that.
There is a track to the top from round the corner in the road, but a hike across frozen peat-bog in high wind was not the safest so we approached from the bottom of the gorge instead.

The first sight of the falls is quite starkly atmospheric:

I made it quite close to the splash-down, where it was tricky taking photos for all the spray covering the filter:

In Assynt, you can’t even sit down in the driver’s seat without admiring the landscape – in this case, as the clouds passed overhead a small gap let a little light illuminate the flanks of Quineag, grey rock dusted with snow: 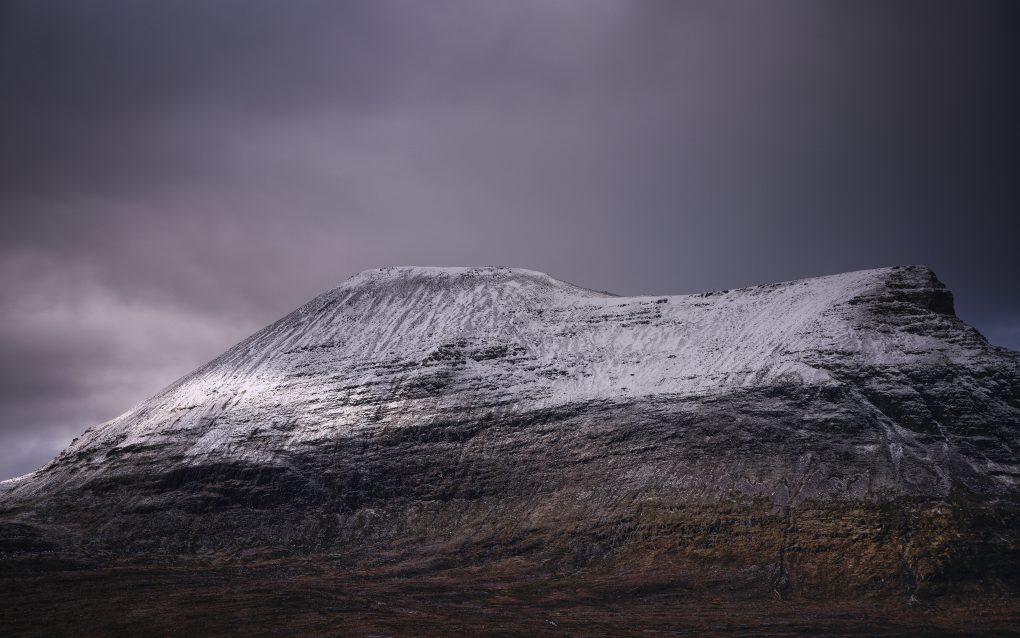 A view from the car window, of all places – just as I was preparing to drive off, this little patch of light on the great snow-covered grey sides of Quineag caught my eye.

From Unapool I drove back along Loch Assynt and out into the Stoer / Clachtoll peninsula, some of my favourite rugged landscape. 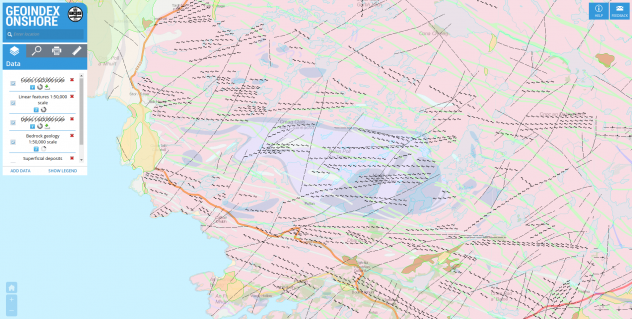 The area around the B869 fairly reeks of history. Starting way back, the geology is awesome: gneiss bedrock (two kinds – Lewisian and Scourie group) interspersed with several minor fault-lines and the Scourie dyke swarm (metamicrogabbro).

This makes for a lumpy cnoc and lochan landform characterized by many rock hillocks interspersed with lochs and lochans in between. 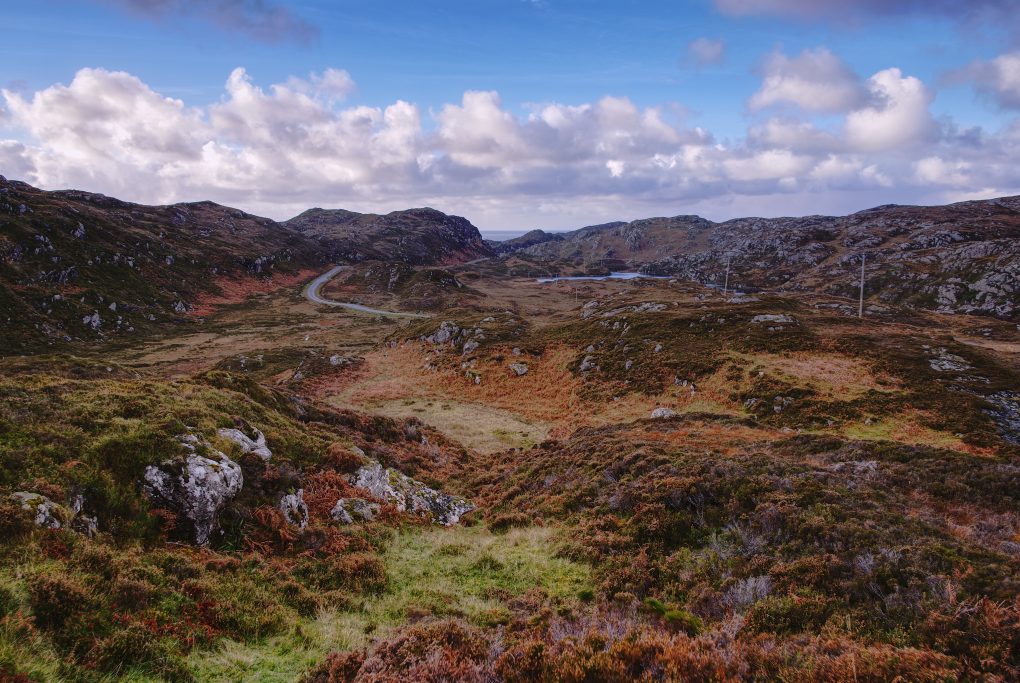 Some of my favourite landscape, absolutely typical of the north-west coast of Scotland: Gneiss, in this case from the Scourian group dating anywhere from 2.5 to 4 billion years old; originally igneous but also subject to later metamorphism.
This whole part of the Assynt peninsula, enjoyed by the “loop” road B869, is a large swarm of metamicrogabbro and amphibolite dykes (formed 1.6 to 2.5 billion years ago).

On a sunny day, the blue sky reflects beautifully in the lochs by the roadside; however, this was not to be this time. Behind the above photo, the road continues wending its way around sharp corners and up and over a rise to one of the most awesome viewpoints I know, with five mountains of Assynt spanning the field of view along the horizon. The weather was not the greatest – rather than a clear vista, there were clouds rolling across the landscape from behind, intersecting with mist rising off Suilven.

Spending a couple of hours standing watching the scenery (and occasionally getting rained-on in the process) afforded me time to ponder the road in front. Travelling up the B869 there are a couple of tracks to either side with entrances blocked by boulders. Obviously there used to be an old route – very narrow at barely a car’s width, with a couple of sharp S-bends, tarmac degrading and obscured by heather/bracken/undergrowth – and the new tarmac has been laid in a much straighter line, with the viewpoint carpark repurposing some of the old route. It makes me wonder what the place would have been like one or two centuries ago, how the road might have evolved from a drovers’ track or similar. 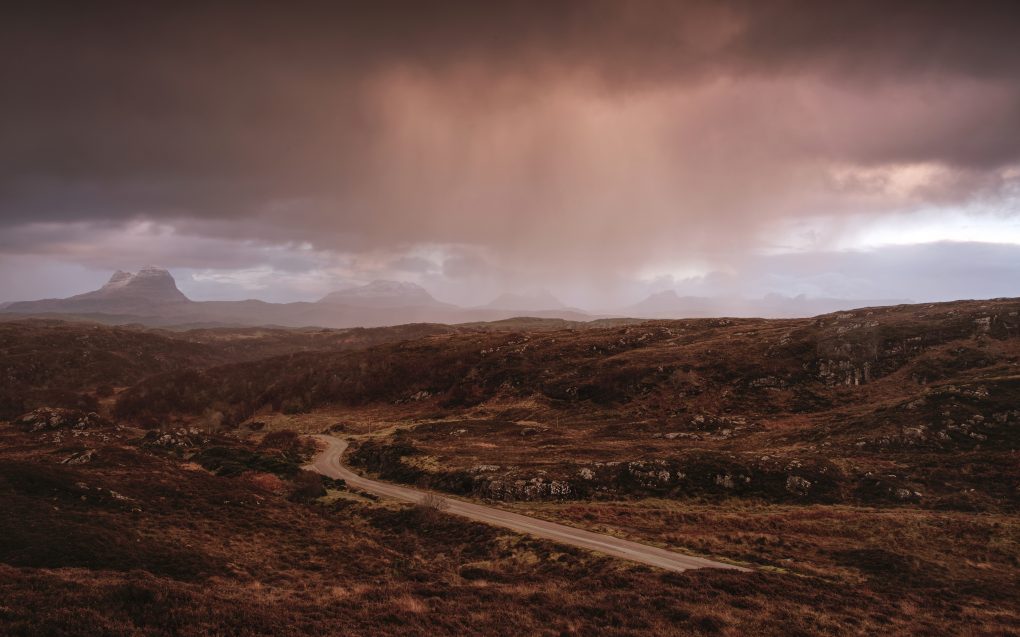 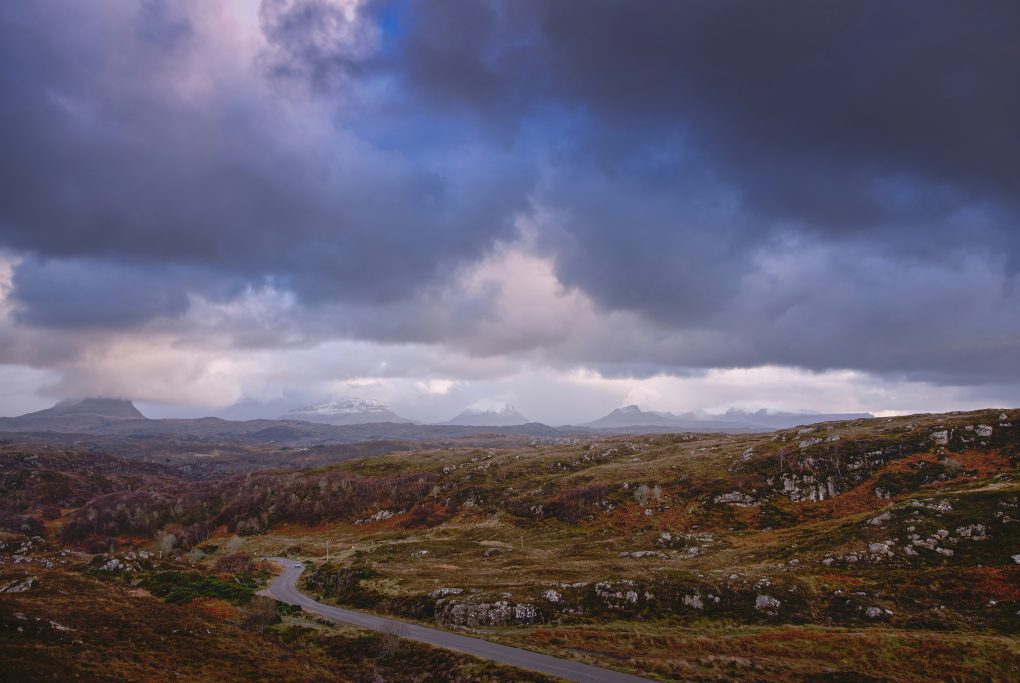 I walked along as much of the old road as I could find, conscious of a sense of heritage and change in land usage.

– Runrig, Saints of the Soil

Having heard about the beach nearby I left Rhicarn and explored a different road, to Achmelvich.

On the way, the sunset was stunning. A brilliant red-orange ball floating above the horizon, offset against the cold slate-grey clouds and paler blue water of Loch Roe. Even partially obscured by cloud, the colour contrast was awesome – and with a whiff of sea-salt on the breeze, put me in mind of a west-coast single malt whisky… 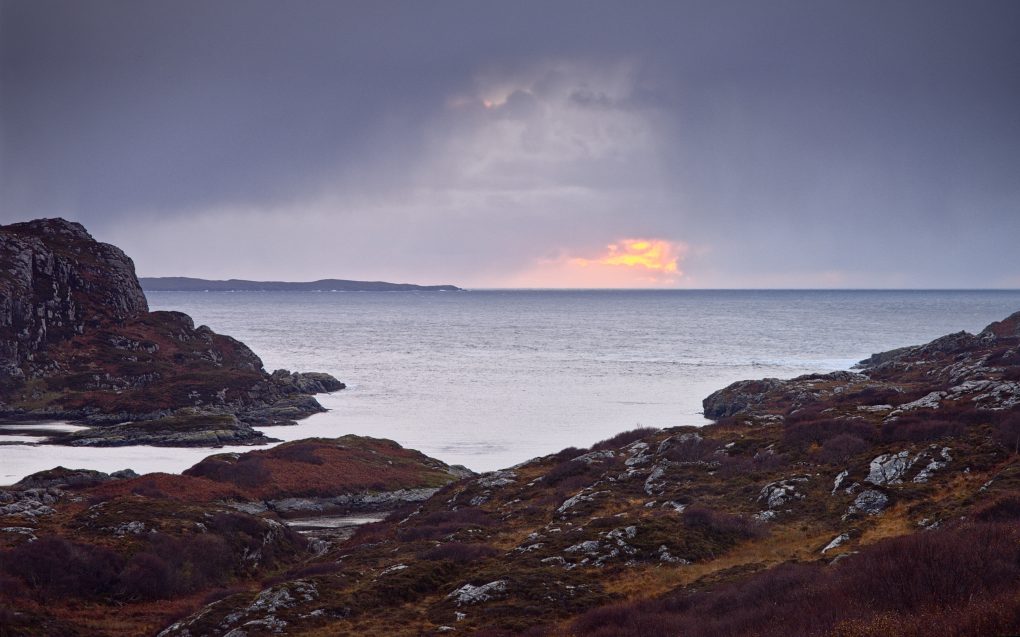 Driving the last stretch of the road to Achmelvich, the sun set right in front of me, a large orange-red ball above the water. The combination of colours, cold blue slate grey sky and warm yellow-orange heather, coupled with the sea breeze put me in mind of a fine west-coast single malt whisky…

The only real downside of the day was Achmelvich itself. The beach at the end of the road is very pretty, clear pale sand, the water beneath the waves’ foam having a beautiful clear blue-green colour. However, the beach is surrounded by a ghastly caravan park which in itself suffices to detract from the scenery. The place is littered with anti-dog signage – at one point I counted no fewer than 6 signs in visible sight with a picture of a dog saying the animal “doesn’t know better” concerning handling of litter, followed by several “dogs on leads” and “no dogs beyond this point”. I found the attitude quite aggressively hateful and will not certainly not patronize the caravan park because of it.

The light of the world keeps shining
Bright in the primal glow
Bridging the living dust to dust
Such a long long way to go
– Runrig, Saints of the Soil

Having finished with the southern half of the Stoer/Clachtoll peninsula, I made my way back to Rogart for the night, but passing along Loch Assynt in the dark I had to stop and take a photo of a cluster of Pine trees near the shore. With a sufficient and necessarily long exposure (2 minutes!) to register anything, I like how the trees look almost stuck onto a smooth silver surface.

My fondness for the area – its geology, its weather (however extreme it felt!), its light and its rugged landscape remains unabated.