Just to the south of Loch Lomond beside the village of Gatocharn lies Duncryne Hill – a positively cute protrusion consisting of sandstone and conglomerate from the Emsian era early in the Devonian Period, affectionately known as The Dumpling.

Having discovered it on Google Earth, thinking it might afford good views over Loch Lomond and the Highlands to the north, I visited it this past weekend.

Some artwork – looking at Loch Lomond from the top of Duncryne Hill:

The Highland Boundary Fault runs from Arran to the south-west, cutting through Loch Lomond between Arden (west) to Balmaha (east), forming a clear escarpment along the side of Conic Hill. 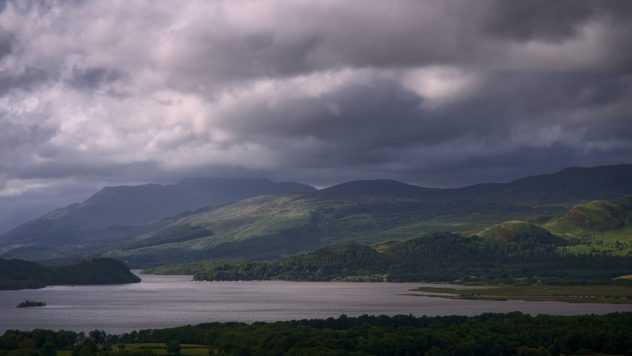 The Highland Boundary Fault runs right through the middle of this photo – through Loch Lomond around Balmaha, causing the rising mountains to the right of the scene.

The clouds were fairly zipping along, obscuring and bathing the landscape in crepuscular rays, so I had to make a short timelapse video of the vista:

With such light and rain-clouds passing by, on returning to the top of the hill I was greeted by a dramatic full-on rainbow with complete primary and secondary bows and supernumaries glowing in super-saturated vibrant arcs over the trig-point.

And just to finish the day’s expedition, there was some beautiful early golden-hour evening sunlight back-lighting a group of trees outside Drymen.