Back last November I spent a very happy few days staying up North; the first day was spent in Glen Affric (sunrise, trees, water and light). 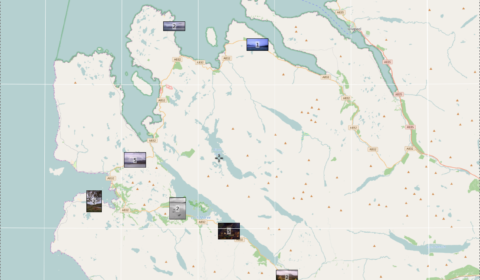 In the few years since I was last up there, there’s been a concerted push to market the road around the far north of Scotland as an “answer to Route 66” and thereby promote it as a tourist attraction.

The second day of my holiday saw lousy weather, completely overcast and foggy for much of the time. So I spent the day driving around Wester Ross wondering where the scenery had got to… trying not to think of it as the NC500 but actually enjoying several stops along the route that I’ve been to previously.

The first stop was the well-known view from a layby in Glen Dochart, above Kinlochewe to admire the sinuous road: 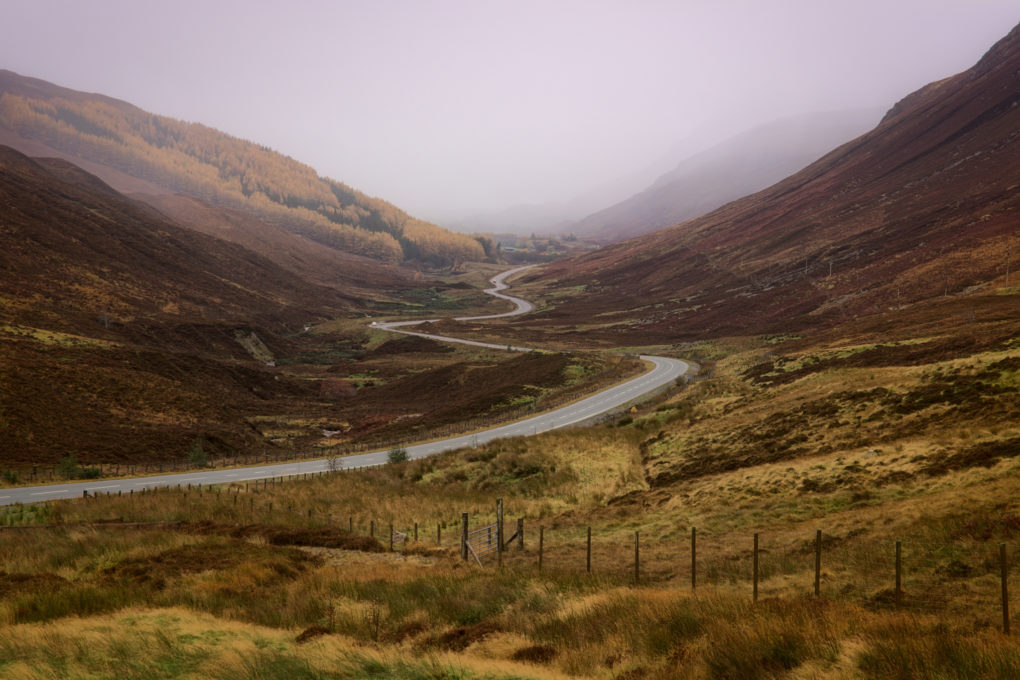 An obvious scene: the road wending through Glen Dochart toward Kinlochewe (not depicted: Kinlochewe, because of the mist).

Pity about the mist…

A little further along on the way through Kinlochewe are two mountains – Beinn Eighe to the left and Meallan Ghobhar and Coille na Dubh Chlaise to the right. We pulled off the A-road and Doglet had his breakfast more or less directly on the Loch Maree fault-line whilst admiring the quartzite rock strata.

There wasn’t much to be said for the views across Loch Maree, although the contrast of dull grey skies and warm autumnal orange and yellow colours was pleasant.

Some years ago, there was a TV documentary, a former politician’s search for the most natural woodland in the UK. After much searching around down south in the New Forest, he came north and explored Caledonian Forest remnants, finally finishing up on an island in Loch Maree – a rather bizarre arrangement of an island with a lochan with another island inside that – on which he stated the trees were least likely to have been touched by mankind. There is an obvious viewpoint, a small section of beach, at Slattadale toward the north-west end of Loch Maree, from which the group of islands can be seen.

Of all the photos I made during that day, this was perhaps the most classical landscape, in that I had the idea for these photos – the location, leading lines of foreground boulders, large expanse of silvery water and Slioch in the distance – planned in my mind for ages before revisiting the area.

What you don’t see is how, while I was making these photos (long exposures, totalling a minute’s exposure, focus-stacked) there was another photographer sitting 20yd away, cooking his morning breakfast – so the photos fail to include the clouds of fragrant bacon and fish smoke billowing past the camera…

Speaking of lunch, mine happened at Badachro, at the Inn. Highly recommended – everyone loved Doglet, which is a good start, and the burger was tasty as ever. Mostly the thing I like most is how the coastline is just like Plockton – west-coast rocky sea-lochs and seaweed – but without actually being Plockton that everyone else flocks to see.

And this is what it’s really like at Badachro:

On a previous trip I had explored as far as Poolewe but not had a chance to go further; this time I stopped off at Loch Tollaidh to admire the rocky outcrops across the water (Lewisian Gneiss and other igneous rock). 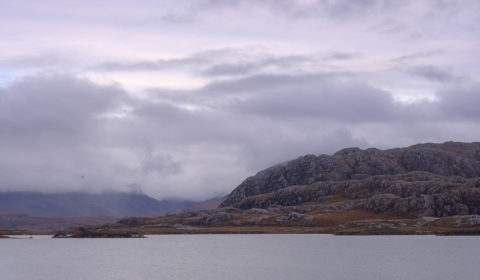 Signs of industry: on the shore of Loch Tollaidh is a small jetty, presumably a put-in for boats to go inspect the small salmon farm. That and the remains of a very dead boat, wood bleached inland, caught my attention:

On travelling up the coast to Mellon Udrigle (what a wonderful name!) I was struck by the view across the Wester Ross Marine Protected Area to the mountains on the horizon on the mainland. On the left, a bit of misty cloud drapes over the top of Beinn Ghobhlach; to the right, there’s more mist flowing over Sail Mhor but the huge bulk of An Teallach was completely hidden behind the cloud.

A wide-angle panorama: low-lying cloud (with a bit of precipitation) and mist flowing over Sail Mhor – the full bulk of An Teallach is completely hidden in the cloud beyond.
The mountain on the far left is Beinn Ghobhlach.

By the time I got back onto main roads, with a very long drive ahead, the light was fading fast toward dusk and the blue hour and clouds in front were thick and closing in fast, so I made one final photo for the day by the side of Little Loch Broom and scarpered fast. 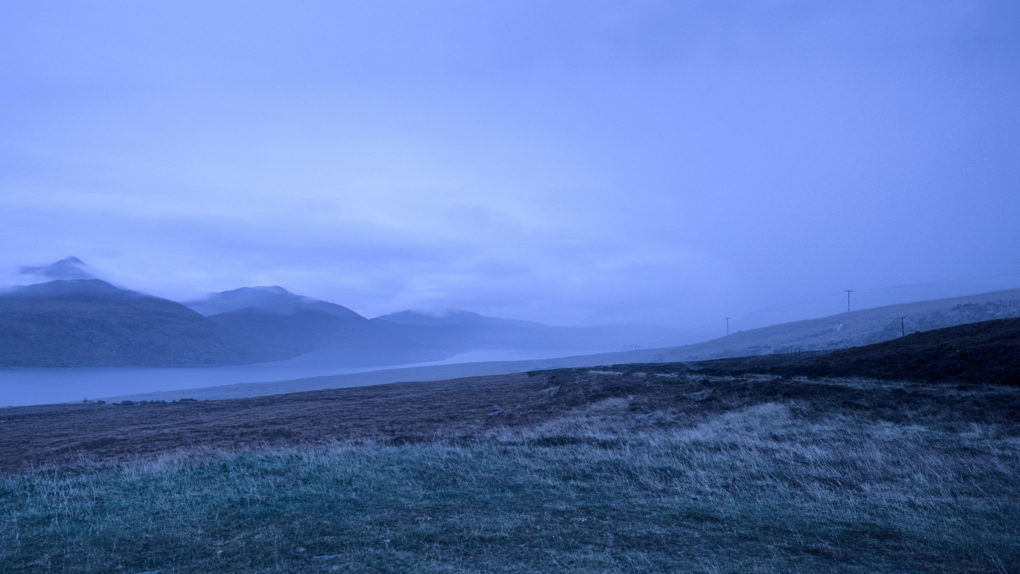 Lots of mist in the distance, travelling the A832 past Beinn Ghobhlach.
I was rather glad to get back in the car and head off before the weather got really bad!