At the start of October, I spent a happy Saturday on a photo-walk organized by a friend around Inverary in Argyll, the group numbering nearly 20 folks.

It was quite a day – over 7 miles walked, folks socialized with, the town and surrounding landscapes investigated.

We started with a trip up the bell-tower and the adjacent All Saints’ Scottish Episcopal Church in the middle of town:

After that, we visited Inverary Jail – quite interesting to get a glimpse of the conditions folks lived in. A friendly guard posed for us:

As we were walking around to the castle for lunch, there was a burst of sunlight over the landscape. A few days prior to the excursion I had discovered an old Pentax film camera in a storage box, and loaded it with film and acquired an extra 50mm prime lens for it, along with an adapter to the Sony NEX-7. So this is Strone Point and the top of Glen Kinglas, on an old 50mm f/1.7 “nifty fifty” Pentax PK-fit lens:

We had lunch in the Inverary Castle tearooms: 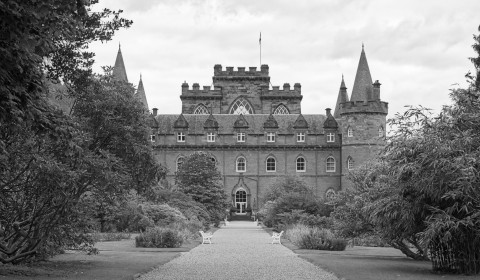 The afternoon was spent climbing up Dun na Cuaiche. I was impressed to see what an effect the geology has on the area, as (igneous) felsite hills to the north of the town give way to psammite (partially metamorphosed sedimentary) bedrock along the shore of Loch Fyne. The watchtower is a folly – the only thing it looks out over is the castle itself, affording no real protection from anyone else feeling like invading!