I remember two particular thoughts from my time in a photo-club (past-tense, as we’ve moved house since).

First, discussing landscape photography with another member, he said he used a large-format (5×4) camera and Fuji Velvia film “because it gets results that express how it felt to be there at the time”. To be quite honest, this put me off landscape – particularly large-format – because I realised the nonsense behind it: after all, if I can name half a dozen people who all shoot LF+Velvia then that conflicts with the unique individuality of a feeling. Face it, it’s just a trend. [0]

Second, a lingering suspicion from club competitions. I felt that the previous photo-club had a bias toward photos where the photographer “got lucky”, which prompted thoughts of rebellion – surely a photo should be marked according to the skill exhibited in its making?

So what is landscape photography? Is it right to just wander around the landscape, see what looks nice and point the camera in the right direction? Or is it desirable to spend hours poring over OS maps, Google Streetview and the MetOffice weather to plan a trip to a specific scene with particular favourable lighting and conditions?

By what criteria will the resultant photograph be regarded as “good” – that it conforms to some guidelines of composition, that it tells a human-interest story, or that it merely represents what it looked like to be in a given place and time?

This pair of images serves as an example. 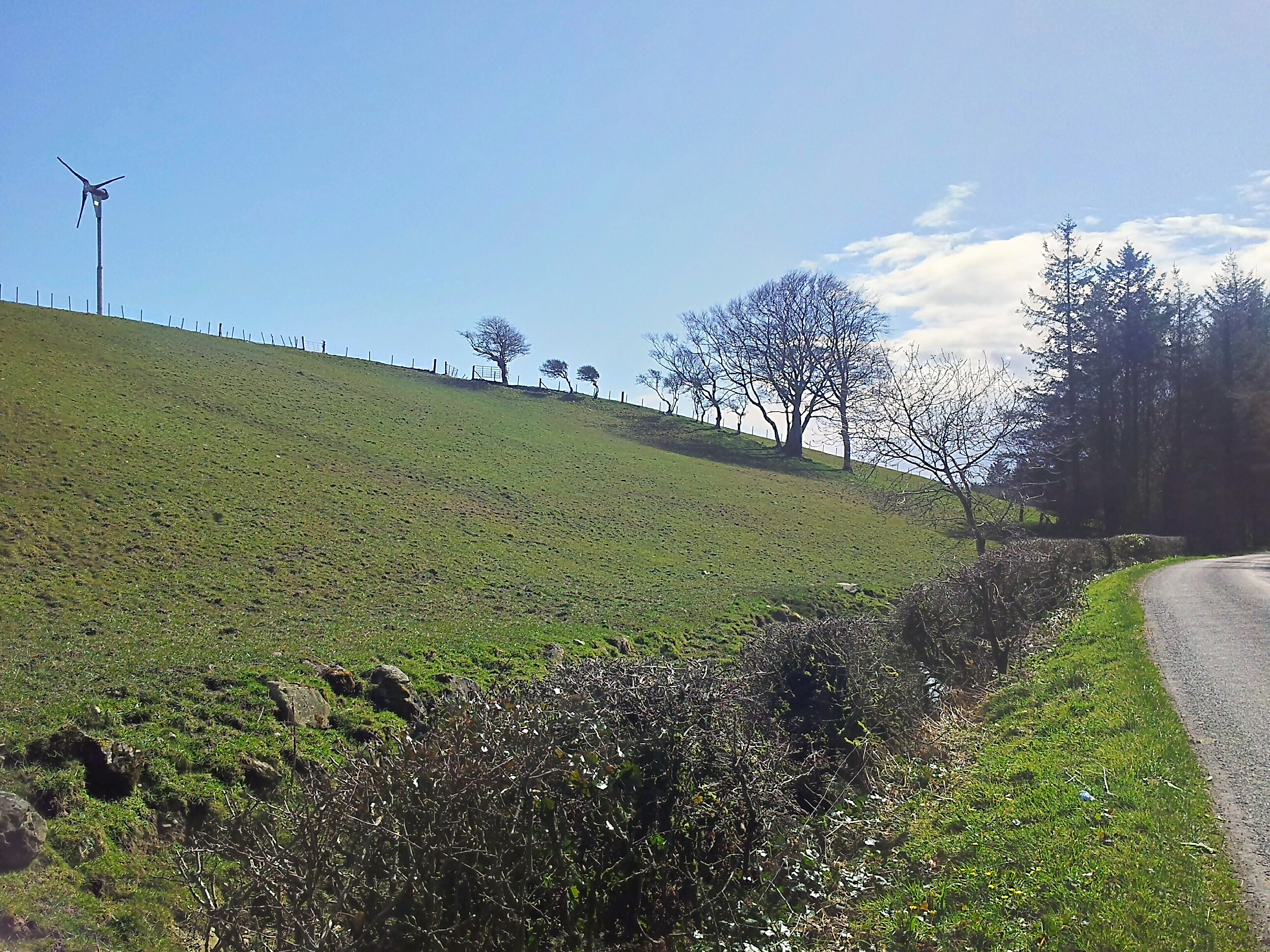 I like it, as a reminder of walking the dog here every day (my story!), but it would be fair to say it was little more than an illustrative snap – the lighting is sub-optimal, the tonality is crass, the image-quality is fairly poor (as befits an image taken on a mobile phone), and above all, it’s cluttered with many elements as the road and wind-turbine introduce whole new themes of mankind’s interactions with nature.

But a couple of weeks ago, I made a photo Some Trees from nearly the same viewpoint: 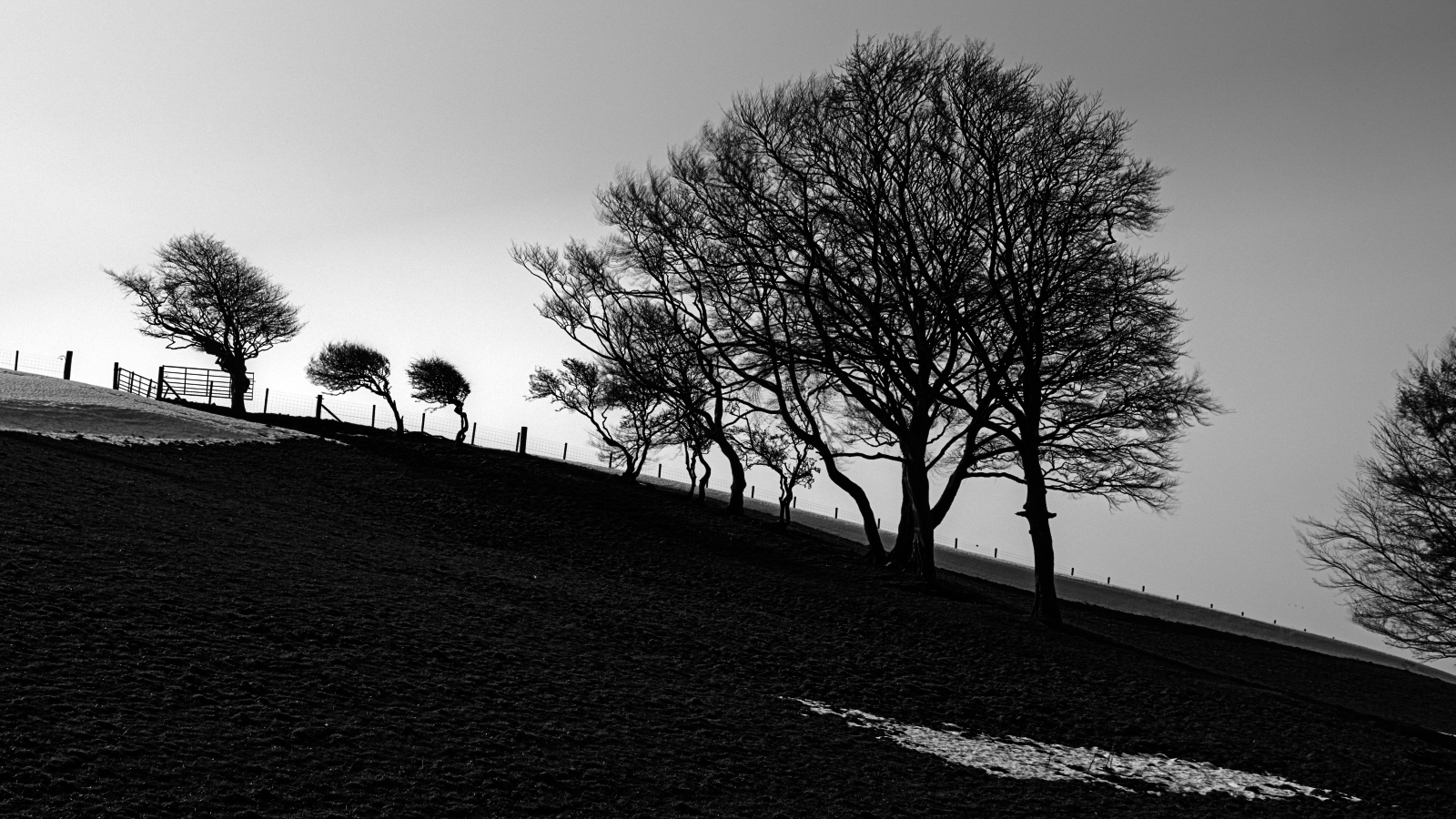 And this is favourably regarded in photographic circles. The difference is selectivity: by choosing a tighter framing (both at the scene and only a slight crop in post-processing), I’ve avoided the road and wind turbine, concentrating on the wind-blown trees plodding like Atlas up the outline of the hill and the remaining vestiges of snow. Of course, by also removing the colour in favour of plain black and white, I’ve made the silhouette more stark and concentrated on shapes and lines and form rather than realism.

But the snap is still true to life. Maybe there’s room for saying landscape photography should be both about the photography (which introduces the detached external off-line phenomena during the stages of image-construction and criticism) but also about the landscape, which one should simply appreciate for how it really looks without being excessively selective?

[0] The other member left the club soon after, but returned for just one evening a couple of years later, where we had quite a cathartic chat: I was returning to landscape on my own terms, and he was now shooting sports digitally elsewhere in the country. And the wheel turns…

2 thoughts on “Selectivity, or Why is Good?”